WHICH SKI CATEGORY IS RIGHT FOR ME?

Skis can be divided into different categories. There is a suitable type of ski for every style of skiing. On this page we explain the five categories of skis and what they mean.

The first category is that of racing skis. These skis are, as the name suggests, derived from race and competition skis. With these skis a distinction is made between slalom and giant slalom variants. Slalom skis are designed for short, aggressive turns, while giant slalom skis are made for high speeds and long turns. Both types perform best on well-prepared pistes and require skiers with sufficient experience.

The second category is that of piste-performance skis. Due to the small width under the foot, these skis work best on prepared pistes. They can be used all over: short and long turns, carving as well as skating, it's all possible. In this category you will find models for both the quiet and the sporty skier.

A very popular category are the all-mountain skis. As the name suggests, these skis can be used all over the mountain; all-mountain skis are suitable for all conditions, even off the prepared pistes. As this type of ski is somewhat wider underfoot, it creates greater buoyancy, which makes skiing in soft snow conditions much easier.

After the all-mountain category come the freeride skis. These are the widest models available. Because freeride skis are so wide, they have a lot of buoyancy in deep snow. However, this width does come at the expense of edge changes on tightly groomed slopes. An experienced skier can also use a freeride ski on normal pistes, but the most fun is had with these skis in thick powder.

The fifth and final category are the freestyle skis. These skis are characterised by rising back edges, which make it much easier to ski backwards and to land. Freestyle skis are developed to do tricks, but often perform amazingly well on the piste as well.

In the webshop we have divided the skis into the above categories, so that it is clear which skis belong to which category. Do you still have questions about the different types of skis or do you want to experience the difference between the categories yourself? Visit one of our shops and try out the different skis in our test centers.

HOW DO I DETERMINE THE CORRECT SKI LENGTH?

One of the characteristics of skis that you should take into account when choosing new skis is the length of the slats. In this article we explain how you can theoretically determine what the right ski length is for you.

When determining the ski length it is important that you first find out which type of ski suits your style of skiing and the terrain you are skiing on. There is a basic method for determining ski length, but for some specific categories (such as race and freeride skis) different rules apply. On our page about ski categories you will find more information about the different types of skis and ski styles. Once you have selected the right type and model of ski, the next step is to determine the length.

The basic length of skis is 10-15 cm shorter than your height. If you are 1.80 m tall, the base length of your skis is between 1.65 and 1.70 m. In practice this means that if you place the skis in front of you in an upright position, they will be approximately at the level of your nose and eyes.

Do you like high speeds, are you considerably heavier than the average weight for your height or do you ski a lot in deep snow? Then choose skis which are 5-15 cm longer than the base length. If you place the skis upright in front of you, the height will then be between your eyes and your height.

If you are a beginner or are not yet technically very proficient, if you ski quietly or if you want to turn very easily, choose skis which are somewhat shorter than the basic length. In these cases 20-25 cm under the body length is fine.

A longer ski therefore offers stability and speed, while a shorter ski for beginners gives a feeling of control when turning at lower speeds. A skier who skis at high speeds with good technique will experience less control with a short length.

The information in the article is a guide, but in the end your personal preference is of course decisive. That is why we recommend trying out a number of different models and lengths when buying new skis. That way you can be sure which ski really suits you. In our test centres in Zoetermeer and Landgraaf you can try out skis and snowboards before you buy. Our advisors are also there to help you find the perfect materials!

If you want to keep your own skis or snowboard in top condition, you should maintain your equipment well. The base (running surface of the ski/snowboard) should not dry out, the steel edges should remain sharp and rust-free, and the ski bindings should be checked every year. You can bring your skis or snowboard to our shops, but a lot of the work can also be done yourself.

This page explains how to maintain your equipment yourself in rough steps, and the video shows which material you need.

What can you do yourself?

A lot of maintenance can be done yourself. For simple maintenance jobs, such as waxing and sharpening, you don't need a lot of equipment. Ideal for updating your equipment during a holiday.

Waxing a snowboard or ski is quite simple. Wax regularly, a well waxed ski/snowboard is more durable but above all it glides much better. Before waxing, make the snowboard or skis dry and clean. Make sure the ski/snowboard is at temperature (not freezing). Melt and spread the wax on the base with an iron. Spread the wax in the direction of the ski. The wax must never smoke. If the wax begins to smoke during melting it will lose all its gliding properties. When the wax is dry, scrape off all excess wax with a special wax scraper (hard plastic plate) in pushing movements in the direction of glide. Finally brush the wax with a special wax brush in the gliding direction (this creates grooves in the wax which make the ski glide even better)!

Regular waxing is a must. Once a week is certainly not excessive. If you carry out other maintenance work on your skis or board in addition to waxing, do this before waxing. Waxing is literally the finishing touch.

There are many types on the market. From extremely expensive competition waxes to cheaper universal waxes. If you do not ski to the nearest tenth of a second a universal wax, which is suitable for all temperatures, will do just fine. Possibly, for the real hobbyist, several waxes are for sale in order to prepare the skis properly for every temperature. But again a good all-round wax works fine for most skiers. Personally I wax a lot with a so-called cold wax, because this wax is harder and keeps the ski in condition for longer. At the moment we have 4 basic waxes in our range:

On top of the basic wax layer you can easily apply another layer to increase your glide speed. If you apply a fluorine wax (increases speed), make sure that you never use the fluorine wax as a base layer. This causes the pores to burn and the skis to dry out. 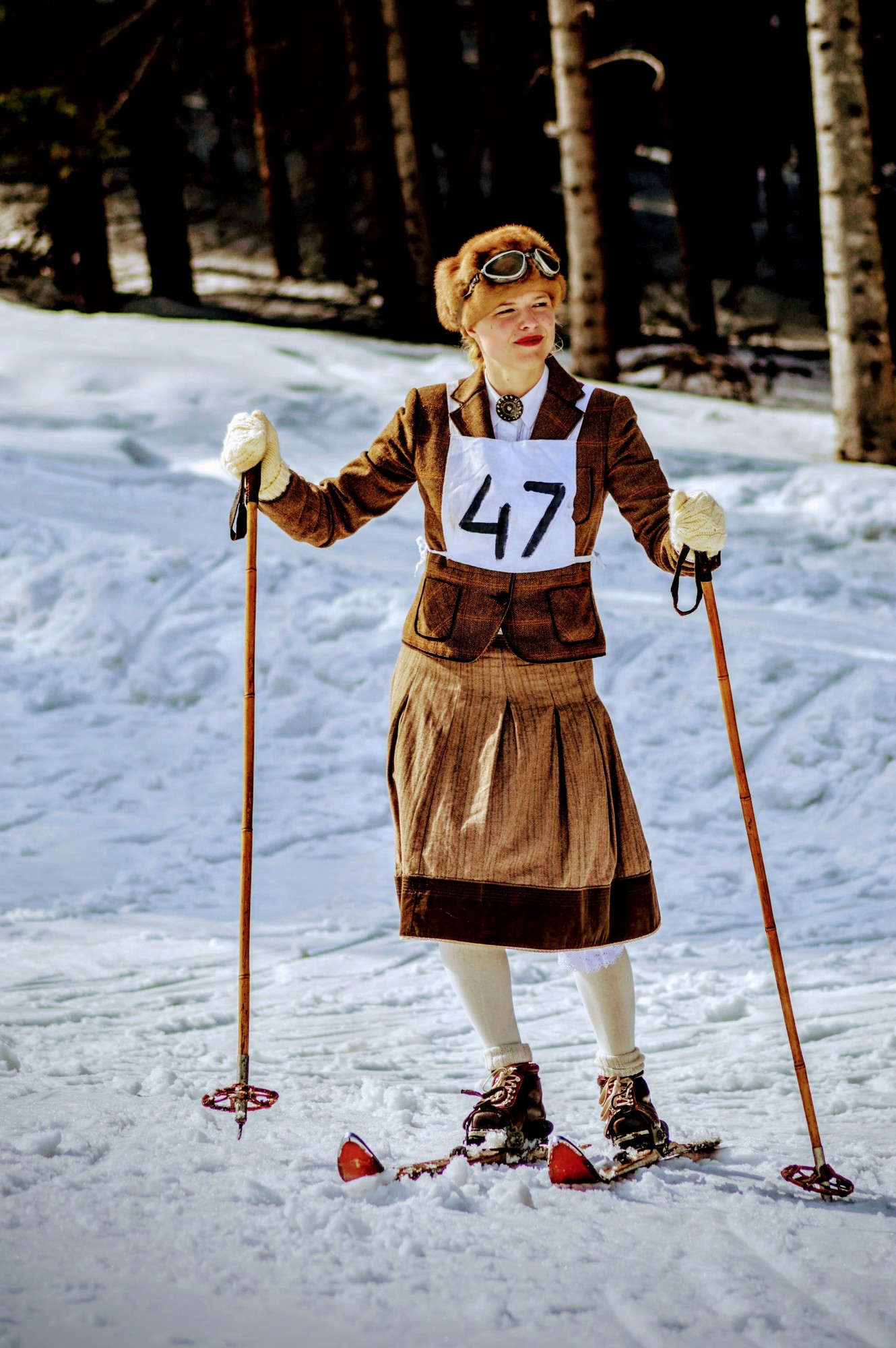 THE DEVELOPMENT OF SKIS

Skis have changed a lot over the years. Twelve years ago, we were still skiing on long straight slats, which were often longer than the body length. This has changed radically with the introduction of carving skis. The skis became shorter and had more tailoring, and the term radius was suddenly used. The lower or shorter the radius, the easier it is to steer a ski into a bend. About six years ago the name 'carving ski' was slowly replaced by the term 'all-mountain ski'. A carving ski was always quite narrow underfoot, just wider than the binding. In the all-mountain ski the ski is made wider, resulting in more surface area and thus more floatation. This makes the ski easy to steer through mushroom or powder snow, or on a rutted piste at the end of the day.

At about the same time as the all-mountain ski, the ladies' ski was also introduced. This started with an attractive print on the ski, but this does not make skiing any better. In women's skis the tip and tail are lighter and therefore more flexible, this way a lady with less weight and less power than a man can still get the same out of a ski. Women also often have a shorter calf muscle, which means they stand more backwards on the ski. The more pressure you can put on the ski, the easier it is to steer. This is compensated by placing the binding slightly more to the front, compared to a unisex ski.

The twin tip ski has been on the rise in recent years. These skis are often Freestyle or Freeride orientated, but often also ski surprisingly well for the normal all-round skier.